The London Eye
This giant Ferris wheel sits on the South Bank of the River Thames in London. Although it is known as the Millennium Wheel, its official name was originally the British Airways London Eye, then the Merlin Entertainments London Eye, and since January 2011, the EDF Energy London Eye . . . but I think everyone thinks of it simply as “The London Eye.” 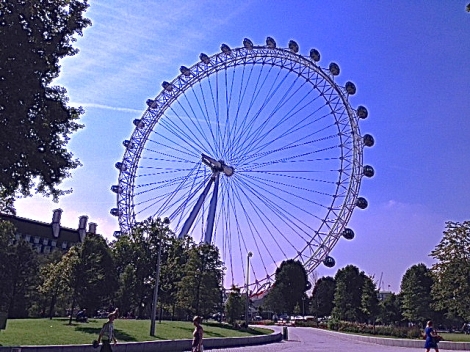 With a structure that reaches 135 meters (443 ft) tall and the wheel that has a diameter of 120 metres (394 ft), it was the world’s tallest Ferris wheel in 1999, and currently the most popular paid tourist attraction in the United Kingdom, with over 3.5 million visitors annually. Supported by an A-frame on one side only, the Eye is described by its operators as “the world’s tallest cantilevered observation wheel.” It offered the highest public viewing point in the city, until it was superseded by the 245-meter (804 ft) observation deck on the 72nd floor of The Shard, shown on the previous page. 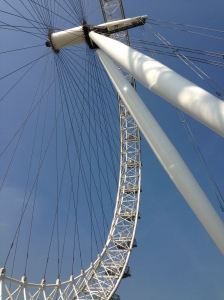 The wheel was constructed in sections and floated up the Thames on barges, then assembled lying flat on piled platforms in the river. Once the wheel was complete it was lifted into an upright position by a strand jack system. It was first raised at 2 degrees per hour until it reached 65 degrees, then left in that position for a week while engineers prepared for the second phase of the lift. The project was an all-European endeavor, with major components coming from six countries: the steel was supplied from the UK and fabricated in The Netherlands; the cables came from Italy; the bearings came from Germany; the spindle and hub were cast in the Czech Republic; the capsules were made in France (and the glass for these came from Italy); and the electrical components from the UK. The wheel’s 32 sealed and air-conditioned ovoidal passenger capsules are attached to the external circumference of the wheel and rotated by electric motors. 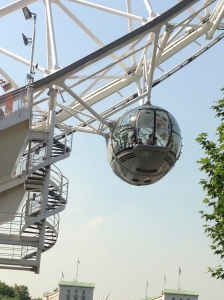 Each of the 10-ton capsules represents one of the London Boroughs and holds up to 25 people, who are free to walk around inside the capsule, though seating is provided. The wheel rotates at 26 cm (10 inches) per second (about 0.9 km/h or 0.6 mph) so that one revolution takes about 30 minutes. It does not usually stop to take on passengers; the rotation rate is slow enough to allow passengers to walk on and off the moving capsules at ground level. 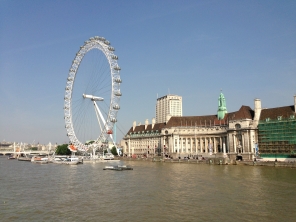 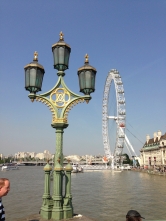 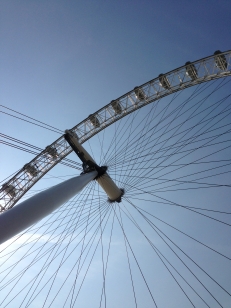 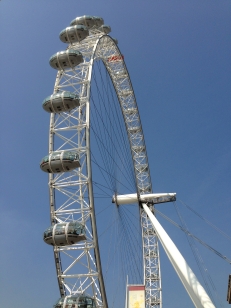