Instead of flying from Amsterdam to London, I elected to take the Stena Ferry Line, leaving from Hoek Van Holland (south of Amsterdam and just west of Rotterdam) in the late afternoon / early evening to Harwich, northeast of London. When I left the ship about 8:00 AM the next morning, I hopped on a convenient train waiting at the station (where the ship docked) and was in London by 10:00 that morning.  According to Stena Line’s web site, 14.6 million passengers travelled with Stena Line during 2013.

The company also transported 3 million cars and 2 million freight units. If you want to save money getting to London, this is the way to do it.  For a private inside cabin and a 3-course dinner in the Reservations-only Dining Room the trip cost about $158; add about $40 for the train ticket and I saved a bundle not having to get a hotel in London after paying several hundred dollars more for an airline ticket! And onboard there were two restaurants, two bars, an onboard shop and even a cinema. For more information on the Stena Line Ferry check out: Stena Line Ferry. 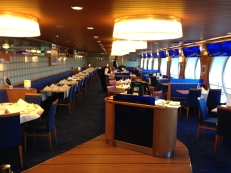 4 responses to “North Sea Crossing | The Netherlands to United Kingdom”