The Gherkin
The easy-to-recognize “Gherkin,” as it has been nicknamed because of its distinctive shape is a 41-story glass and steel skyscraper built in 2004; it was originally known as the Swiss Re Building, and was later renamed to its street address 30 St. Mary Axe after the original developer sold the building in 2007. The tower was built in the heart of London’s financial center at the site of the 1903 Baltic Exchange Building, which had been damaged by a terrorist attack in 1992.

The first skyscraper in the middle of a relatively low-rise area with many historic buildings and narrow medieval streets, the Gherkin created a controversy that continues today, as many more tall, sleek, glittering high-tech buildings can be seen on the London skyline.  The cigar-shaped structure has a steel frame with circular floor plans and a glass facade with diamond-shaped panels. 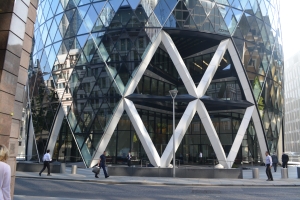 The swirling striped pattern visible on the exterior is the result of the building’s energy-saving system that allows the air to flow up through spiraling wells. On the street level, the Gherkin’s base is well integrated with an open public plaza. Huge white X braces create a dramatic entrance. The top of the tower, where visitors find an open hall covered by a glass conical dome is even more spectacular (although the building is not open for public access or viewing). Its unique, bold and energy efficient design has won the Gherkin many awards including the Stirling Prize, the London Region Award, and the Emporis Skyscraper Award. For more information about the Gherkin Building, check out The Gherkin Building – London, UK. 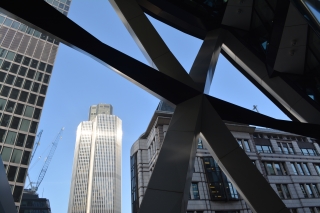