The Shard
Standing at a height of 306m, the Shard is the tallest building in the European Union, which includes a breathtaking 15-story spire. The unique building, designed by Italian architect Renzo Piano, is a multi-use vertical city that features high quality offices, the 5-star Shangri-La hotel with more than 200 rooms and suites that opened in November 2012, and 3 floors of signature restaurants. It also features exclusive super prime residential apartments. In September 2013, I visited the Observation Deck on the 72nd floor of the building and took these photographs of the steel structure that is visible from the Observation Deck and the surrounding cityscape below. At the entrance to the Gift Shop a video is playing that graphically illustrates the concept behind the building’s design and how it fits historically into the development of London.  Click here to view the video Concept Behind the Building of the Shard. 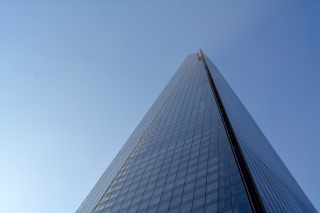 The storm clouds have been gathering over the Shard ever since it was announced, 11 years ago. Now that the building has reached its full height, it has inevitably become a lightning rod.

I am sure Mr. Rose did not realize how true that was! Apparently the Shard is actually a very good conductor, since lightning struck the top of this one-of-a-kind tower on Thursday May 22, 2014 during one of the city’s most severe rainstorms.  This picture, which shows a single bolt hitting the top of the skyscraper was taken by Michael Hoskinson from his office across the Thames.