The Walkie-Talkie
Officially known as 20 Fenchurch Street, this skyscraper is a 37-story commercial tower in London’s financial district. It takes its name from its address on Fenchurch Street, but its referred to as the Walkie-Talkie because of its distinctive shape. With a finished height of 160 meters (525 ft), it is the fifth-tallest completed building in the City of London. Designed by architect Rafael Viñoly and costing over £200 million, it features a highly distinctive top-heavy form that appears to burst upward and outward. This shape was intended to maximise floor space towards the top of the building, where rent is typically higher. A large viewing deck and ‘sky gardens’ are included on the top three floors, which will be open to the public.

The tower was originally proposed at nearly 200 m (656 ft) tall but its design was scaled down after concerns about its visual impact on the nearby St Paul’s Cathedral and Tower of London. It was subsequently approved in 2006. Even after the height reduction there were continued concerns from heritage groups about its impact on the surrounding area. The building includes a botanical gardens at the top, which will be London’s highest public park. The gardens will span the top three stories, will be accessible by two express lifts, and shall include a viewing area, terrace, café, bar and restaurant. Fourteen double-deck lifts (seven low-rise up to the 20th floor, seven high-rise above the 20th floor) will serve the main office floors of the building. The south side of the structure will be ventilated externally to improve efficiency and decrease solar gain, while the east and west faces incorporate extensive solar shading.

Evidently, the design solutions to decrease the impact from the sun glare has not worked. During the building’s construction, it was discovered that for a period of up to two hours each day if the sun shines directly onto the building, it acts as a concave mirror and focuses light onto the streets to the south. Spot temperature readings including up to 91 °C (196 °F) and 117 °C (243 °F) were observed during the summer of 2013, when the reflection of a beam of light up to six times brighter than direct sunlight shining onto the streets beneath damaged vehicles parked on the street nearby, including one on Eastcheap whose owner was paid £946 by the developers for repairs to melted bodywork.

The media responded by dubbing the building the “Walkie Scorchie” and “Fryscraper.” In September 2013, the City of London approved plans for the developer to erect temporary screening on the streets to prevent similar incidents, and that they were also “evaluating longer-term solutions to ensure the issue cannot recur in future.” In May 2014, it was announced that a permanent awning would be installed on the south side of the higher floors of the tower. In an interview with The Guardian, Architect Rafael Viñoly suggested that global warming was at fault! 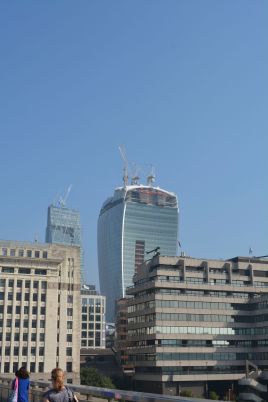