Casa Rosada, the Presidential Palace is to Argentina what the White House is to us in the United States. While the President does not actually live in the palace, this is where his official business is conducted and where ceremonial activities take place. The pink-colored palace seen today has evolved over the centuries from the earliest days of the city, changing and expanding over time. 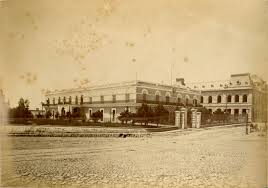 Casa Rosada sits at the eastern end of the Plaza de Mayo. The site, originally at the shoreline of the Río de la Plata, was first occupied by the “Fort of Juan Baltazar of Austria,” a structure built in 1594.  It was replaced in 1713 by a masonry structure complete with turrets called Castle of San Miguel, which became the effective nerve center of colonial government. Following independence, President Bernardino Rivadavia had a Neoclassical portico built at the entrance in 1825, and the building remained unchanged until 1857, when the fort was demolished in favor of the new Taylor’s Customs House, an Italianate structure that was Buenos Aires’ largest building from 1859 until the 1890s. 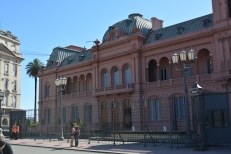 The old fort’s administrative annex, which survived the construction of the Customs House, became the Presidential offices of Bartolomé Mitre in the 1860s. His successor, Domingo Sarmiento, improved the drab building with patios, gardens and wrought-iron grillwork, and had the exterior painted pink reportedly in order to defuse political tensions by mixing the 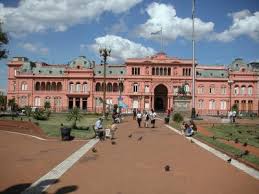 red and white colours of the country’s opposing political parties (red was the color of the Federales, while white was the color of the Unitarians). The Central Post Office next door was commissioned in 1873, and in 1882 the cramped State House was replaced with a building resembling the neighboring Central Post Office. In 1884 the two structures were joined together by the iconic Italianate archway that can be seen today. The resulting State House, still known as the “Pink House,” was completed in 1898 by expanding it to the east, requiring the destruction of Taylor’s Customs House. 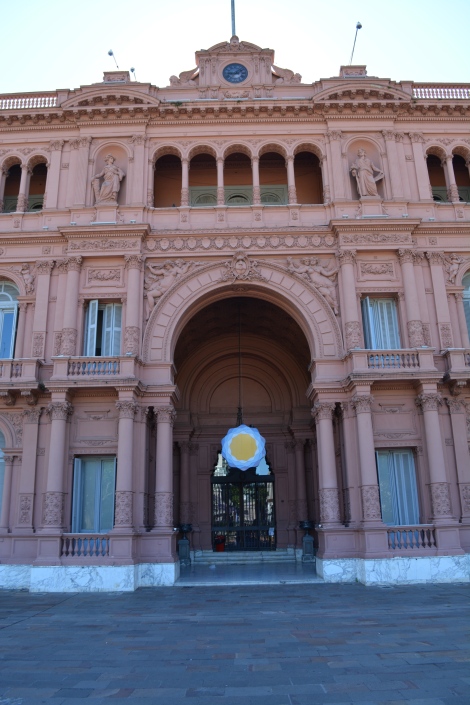 Eva Peron, First Lady during her husband Juan Peron’s presidency, continues to be one the country’s most popular political figures, at least in recent history. As we saw when visiting the Recoleta Cemetery, her family mausoleum is on everyone’s “must see” list. She is known for her passionate support of the underprivileged, working classes, and a strong proponent of women’s rights.

I demanded more rights for women because I know what women had to put up with.

We asked our guide about the movie Evita, and what we understood to be Argentinian’s displeasure with singer/actress Madonna’s performance as Eva Peron.  He explained that it was not so much her performance, but rather the fact that she had convinced the President to allow her (of all people!) to film a scene on the actual balcony of Casa Rosada used by Eva Peron when she greeted the public or made speeches to the crowds in front of Plaza de Mayo. Surprisingly, the famous balcony was not the one on the front of the palace high above the large central arched entrance, but a smaller one on its north wing that extended out farther into the plaza so that she could be nearer to the people; no one had ever been permitted to step onto that “sacred ground” prior filming of the movie.