We took one day out of our 16-day Argentinian adventure to visit the Historic Quarter of Colonia del Sacramento, Uruguay – a World Heritage Site designated by Unesco in 1995 (the only World Heritage site in Uruguay). We took the early morning high-speed ferry from Buenos Aires’ Buquebus Terminal, across Rio de la Plata, the widest river in the world.

After a little over an hour, we arrived in Uruguay at the Puerto Deportivo and were met by our local guide, who led us into the Visitors Center across the street from the Ferry dock. Here, we saw a unique fifteen minute video presentation with images moving down one undulating wall and back on another that provided an interesting historical overview of Colonia del Sacramento and the region; and, in the Centre’s Gallery a creative series of cartoon-like graphics (the first three of which are shown here). The series of prints explain the evolution of the colony, from Juan Diaz de Solis’ arrival at Rio de la Plata in 1516, the colony’s founding in 1680 by the Portuguese and then capture of the colony by the Spaniards, and on and on through its history and development to its present-day role in preserving the area’s cultural heritage. 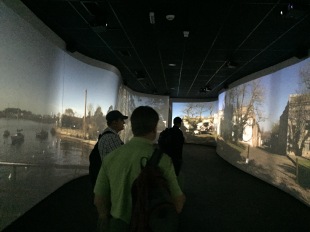 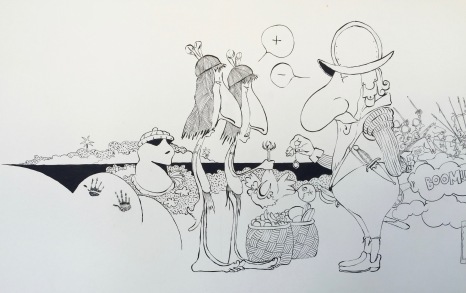 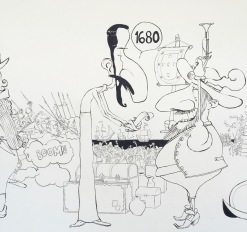 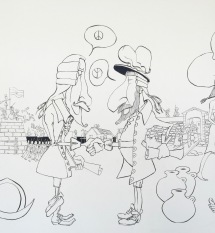 Before spending the afternoon strolling around the Historic Quarter of the town, our guide gave us a brief tour of the surrounding area. The town, which now has about 27,000 residents, enjoys a slow-paced environment with a beautiful beachfront along the river, several outlying residential neighborhoods, including one surrounding the Sheraton Colonia Golf and Spa Resort; and, an enviable lack of traffic!

On our way to the Historic Quarter, we stopped by the Capilla San Benito for a look inside at the alter’s Black Saint, called that in reference to his Sicilian-Moorish origins (and dark skin color), widely revered across South America. The chapel was established in 1761, which makes it the oldest church (chapel) in Uruguay. During the Great War the chapel was badly damaged and stripped of all its ornaments and sacred vessels. Evidently, even the church bells were removed, likely due to the army’s typical interest in bronze. 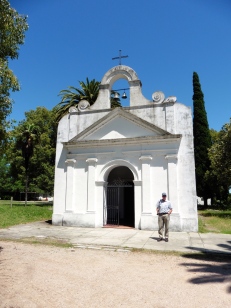 Although the church is historically and culturally important, it is left completely open and unlocked at all times. Our guide explained that there is no crime in the town, and no one would harm the church or steal its artifacts. As you can see from the photographs below, the inside of the Church is not ornate in any way, particularly compared with churches and cathedrals we have seen in other locations.

5 responses to “A Glimpse of Colonia del Sacramento | Colonia, Uruguay”