The Metropolitan Cathedral is an architectural masterpiece and the main Catholic church in Argentina’s capital city. The cathedral stands on the north side of Plaza de Mayo, a short walk from other major city attractions, including 9 de Julio Avenue and the Casa Rosada. The cathedral hosts Noche Buena, Argentina’s most important midnight mass, held on Christmas Eve. It has previously been presided over by Jorge Mario Bergoglio, who became Pope Francis in 2013.

In 1580, Buenos Aires founder Juan de Garay designated a plot of land for the city’s first major church. Today’s cathedral stands on the same plot. It was built by European architects using a fusion of 18th and 19th-century architectural styles. The cathedral’s impressive façade includes 12 Hellenic columns, which represent the 12 apostles. Above the columns is a carved mural that portrays the reunion of Joseph with his brothers and his father, Jacob. While the outside might not look like a church, the inside certainly does. There are tall arcaded aisles, frescoes and decorative sculptures and furnishings. 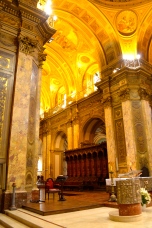 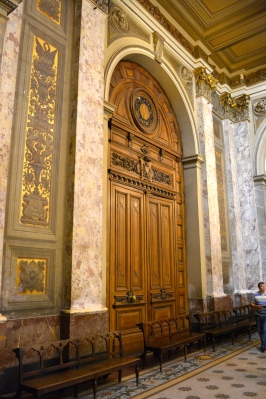 We were in the cathedral during the changing of the guards, who protect the ornate marble mausoleum of General Jóse de San Martín. He is a national hero and led revolutions against Spanish rule in Argentina and other South American nations. The tomb also houses the remains of Juan Gregorio de las Heras and Tomás Guido, two notable generals from the Argentine War of Independence.