Retiro is one of the largest hubs of transportation services in Argentina, and is home to many high-end stores and residential areas popular among both local wealthy residents and expatriate executives. About 26,000 of its people, however, including thousands of illegal immigrants, occupy a “shantytown” built along the Port of Buenos Aires in the 1930s. The word ‘retiro’ means retreat and this neighborhood was so named as it was once a country retreat.

Retiro is most commonly associated with transit, with the north side of the neighborhood home to Buenos Aires’ busiest bus and train stations along with ferries to Uruguay, taxis, bicycles, and taxis. We boarded the ferry from here for our one day trip to Colonia, Uruguay. Retiro is a geographical frontier of several neighborhoods — where Puerto Madero, Microcentro, Recoleta, and others come together. As a result, its sometimes difficult for tourists to know exactly in which neighborhood they are located.

Retiro is also home to a number of five star hotels, including the Four Seasons, Marriott Plaza, Sheraton, and Sofitel. The oldest of these, the Marriott Plaza, was opened in 1909. There are also numerous government agencies headquartered in the district, including the Air Force, the Navy, the National Mint, and the Rail Transport Agency. Marcelo walked us past the San Martin Palace, which now serves as the Ceremonial Headquarters for the Ministry of Foreign Relations.

The Beaux Arts style palace was finished in 1909, and acquired by the Argentine government in 1936. Looking through the locked gates, we could see the grandeur of its formal arrival court and the two expansive wings of rooms on either side. From the San Martin Palace, we walked through a small park in front of the palace and across the street to the Plaza San Martin, one of Buenos Aires’ largest and most beautiful formal parks. Over the past centuries Plaza San Martín has been used for bullfights, slave trade, fortifications, and other uses.

Across the street from the park, Marcelo pointed out the Paz Palace, a former mansion in Buenos Aires, which now houses the Military Officers’ Association, a social club maintained by the Argentine military. Built entirely with material imported from France, the building was built between 1902 and 1914 for José C. Paz, the owner of the city’s second-most circulated newspaper, La Prensa. 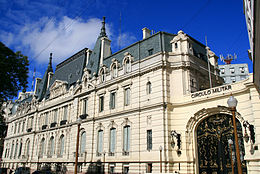 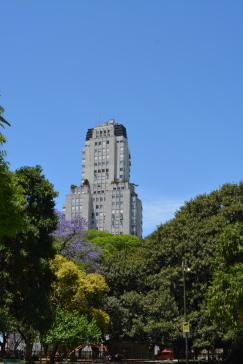 And, on the south side of the park we could see the 32-story Art Deco-styled Edificio Kavanagh, which was once the tallest concrete structure in the world. As we walked down the hill to the eastern edge of the Park we could see Torre de los Ingress, a clock tower modeled after London’s Big Ben, a gift from the local British community to the city in commemoration of the centennial of the May Revolution of 1810. During the Argentinian war with Great Britain over the Falkland Islands, the tower was an obvious target of angry Argentinians. Our guide explained that the memorial to fallen soldiers of that war, the Monumento a los Ca’dos de Malvinas was aligned with the Torre de los Ingress so that Argentinians would not forget the bad blood spent between the two countries. 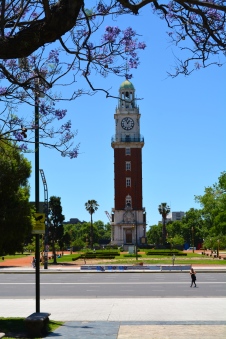 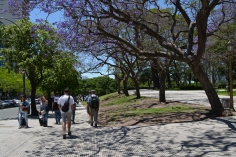