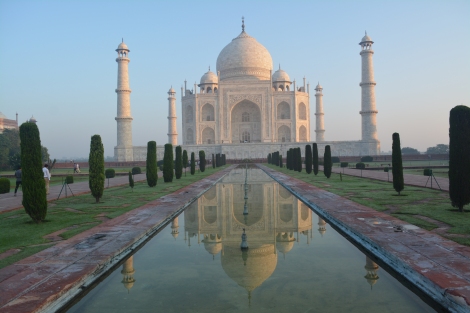 UNESCO’s World Heritage Centre has recognized the Taj Mahal as “the jewel of Muslim art in India and one of the universally admired masterpieces of the world’s heritage.”  In terms of its beauty and architectural magnificence, it was as impressive as I had heard. Begun around 1632 and completed around 1653, the mausoleum was the vision of the Mughal Shah Jahan, who dedicated it to his third wife, Mumtaz Mahal, who died during the birth of their third child. The image of the marble dome that surrounds her tomb reflecting in the pond that extends 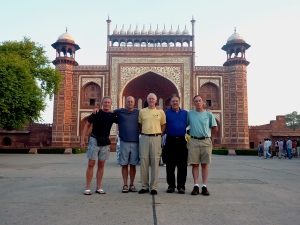 from the Darwaza-i-Rauza (gate of the mausoleum) is perhaps the most photographed of the complex. My traveling companions and I were fortunate to be able to visit the mausoleum in the late afternoon for sunset, as well as in the early morning, as white marble walls of the mausoleum shimmered in the morning sunlight.  The photographs on the following pages were taken as we drove through the City of Agra on our way to tour the Taj Mahal, the Main Entry, the Gardens, and the area surrounding the mausoleum.

One response to “The Taj Mahal | Agra, India”

Gaudi’s La Pedrera - Casa Milá. The last private residence designed by Antoni Gaudí - Barcelona, Spain
One of the oldest streets in this most interesting city ...... 1623!
The Village of Pinhão
Vintage House Hotel
. . . a view of the vineyards of Croft Vintage Port
Last evening in Spain . . . along the Costa Brava
Antoni Gaudi’s genius at play as the sun shines through stained glass windows of the Basilica de la Sagrada Familia
OLLIE HAS CONNECTIONS IN THE WORLD OF GLAMOUR TOO!
MAC HAS ALWAYS KNOWN HE WAS DESTINED FOR FAME
Even doodles enjoy a trip to the mountains to see the fall colors!
The iconic Penn State Nittany Lion, by sculptor Heinz Warneke - 1942
It’s a chilly but beautiful Sunday . . . perfect for walking the Highline Canal in Denver, CO with my dog, Ollie.