After a sunrise visit to the Taj Mahal, we had the opportunity to visit two more Agra landmarks before our long drive back to Delhi – Agra Fort and Itimad-ud-Daulah Mausoleum, both of which are of historic and cultural significance, influencing the vision and providing connections to the history of the Taj Mahal located nearby, across the Yamuna River. The photographic galleries that follow provide only a glimpse of these century-old masterpieces.

AGRA FORT
Agra Fort is a UNESCO World Heritage site, located about 2.5 km northwest of the more famous Taj Mahal, which can be seen from some of the many rooms in the Fort. The present-day structure was built by the Mughals from an existing fort that had stood there since at least the 11th century. Originally a brick fort, it can be considered a walled city, which at some point in its history included over 500 structures.  Realizing the importance of its central location, Akbar the Great, (Mughal Emperor from 1556 until his death in 1605) made it his capital in 1558. 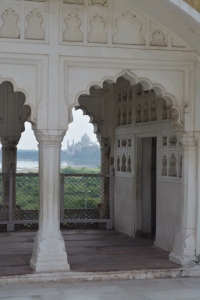 Akbar had it rebuilt at that time with red sandstone on the external surfaces, and brick on the inside. The reconstruction took over eight years to complete, requiring over 4,000 construction workers before it was completed in 1573.  Akbar’s grandson, Shah Jahan, transformed the Fort to its current state. Unlike his great grandfather, the Shah built new structures within the Fort from white marble, destroying some of the earlier sandstone buildings to make room.  Shah Jahan also built the beautiful white marble Taj Mahal for his wife, Mumtaz Mahal across the river. Because of the exorbitant amount of money he spent to build the mausoleum, however, he was deposed and restrained by his son inside Agra Fort. Supposedly, Shah Jahan died in a tower with a marble balcony with a view of the Taj Mahal.