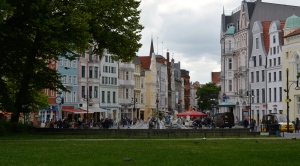 Rostock is the largest city in the north German state of Mecklenburg-Vorpommern. Located on the Warnow River, the city has a population of about 200,000 residents; it is home to one of the oldest universities in the world, the University of Rostock founded in 1419. Large parts of the central city were destroyed in World War II by Allied bombing in 1942 and 1944. After the war through reconstruction and subsequent extension, the city became a major industrial centre of the German Democratic Republic (GDR) with the port being developed as the state’s primary gate to the world. Much of the historic centre has been faithfully rebuilt and much of its historic character restored. This includes several buildings characterised by vertical brick ribs, a style common to the Hanseatic towns.

City Highlights and Observations
The train station is about a five to ten minute walk from where the Eurodam was docked, along the marked sidewalk, down and under the railroad tracks, then up to the station. You can get information from inside the station, and buy your round trip ticket into Rostock (about 2 Euros as I recall) at the kiosk near the loading platforms. The trains are quiet and clean, and safety is not an issue – this is rural Germany after all and everyone is courteous, respectful and very friendly (and of course, speak English if you do!). The trip takes all of about 20 minutes and you will find yourself at the Rostock Central Station, where you can hop on a bus or walk the short distance into the central city, which is what I did. 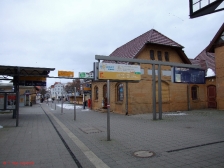 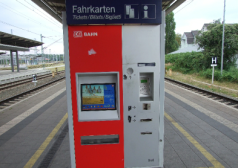 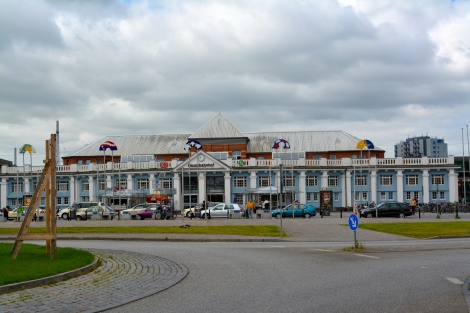 I followed the tram tracks into the central square of Rostock, coming first across the Steintor, one of originally 22 “gate towers,” which is a unique Renaissance-style structure once part of Rostock’s city wall. The Steintor has a steeply pitched tower-roof, and the large Coat of Arms of Rostock has been placed directly above the vaulted gate opening. The impressive ornately detailed brick building just across the street from the Steintor is The Rostock House of the Estates, today the seat of the Higher Regional Court of Mecklenburg-Vorpommern. The neo-Gothic building was constructed between 1889-1893 on behalf of Grand Duke Friedrich Franz II, as the administrative and judicial seat of the estates. It is the typical style of the Wilhelmine (Wilhelm II era) state architecture, which combines elements of Gothic to Baroque architectural in a monumental style. The beautiful red brick building has numerous decorations, turrets and gables. 3 responses to “One Day in Warnemunde and Rostock, Germany | Baltic Sea Cruise”