The primary feature (and main attraction) of the Lower Park, however, is The Great Cascade and the Pool, located in the heart of the Peterhof complex. The idea for this “recreational spot” (as the Emperor called it) was conceived in 1705, with work starting on construction of the complex of palaces, fountains, and decorative sculpture in 1714; nine years later Peter the Great marked the completion of the most famous of its features . . . the Great Cascade, with its sixteen fountains, 241 gilded bronze statues and bowls and vases, and streams of water, cascading from a series of steps that transition from the upper Palace plaza to the Alley of Fountains that leads to the Gulf of Finland.

THE GREAT CASCADE AND POOL 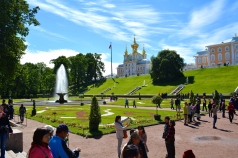 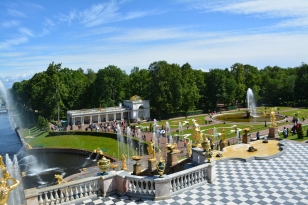 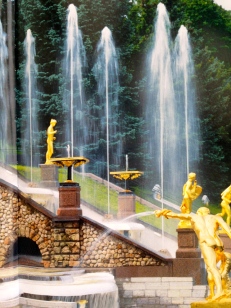 Next stop on the Baltic Sea cruise . . . One Day in Helsinki, Finland.