It took 24 years (1883 through 1907) for stonecutters, artists, mosaicists, ceramists, enamelers and other craftsmen to construct and complete The Church on the Spilled Blood, a Russian Orthodox church of unparalleled beauty. This construction period is not a surprising fact, given the unbelievable detailed design of the exterior and intricate colorful mosaics that dominate the cupolas and interior of the church. It is everything I had heard, and more! 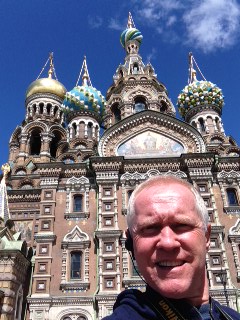 We were fortunate to visit this historic monument (and fantastic work of art) on a sunny afternoon, and unlike some sites we toured in Saint Petersburg, photography of the amazing interior was permitted. While I was overwhelmed by the scale and grandeur of the Winter and Catherine’s Palaces, I was more impressed with the Church on the Spilled Blood, in part perhaps, because of its historical purpose, and the dedicated efforts of so many who created and preserved this Russian treasure. The church is aptly named . . . it was built on the spot where Emperor Alexander II was assassinated, the specific site of the murder marked by a special chapel in the western part of the building beneath the bell. It is here where part of the carriageway and railings that were stained with blood at the time of the assassination can be seen. The Church is prominently situated along the Griboedov Canal, which at the time had paved roads along both sides. On March 13, 1881, as the Tsar’s carriage passed along the embankment, a grenade thrown by an anarchist conspirator exploded. Shaken but unhurt, the Emperor got out of the carriage and started to reproach the would-be assassin.  A second conspirator took the chance to throw another bomb, killing himself and mortally wounding the Tsar. In order to build a permanent shrine on the exact spot where the assassination took place, it was decided to narrow the canal so that the section of road on which the Tsar had been driving could be included within the walls of the church.

There is no central entrance to the church; instead, on either side of the bell tower there is a parvis with its own doorway. The church’s central and tallest colorful onion dome reaches a height of 266 feet, and the structure covers a total area of over 17,000 square feet. The cupolas are covered with bright enamels and the hipped roofs with colored tiles. At the time the church was constructed, the cost exceeded over 4.6 million rubles, almost totally funded by the Imperial family. 4 responses to “The Church on the Spilled Blood | Saint Petersburg, Russia”