The design of the church, including the decorative interior follows the typical Petersburg practice of combing the traditions of western religious architecture and Ancient Russian church design. The interior is designed like a ceremonial hall, divided into three naves. Its main feature is the carved gilded iconostasis, built and installed between 1722 and 1729. The central section of the iconostasis is fashioned after a triumphal arch, a symbolic celebration of the victory of Russia’s troops in the Northern War. 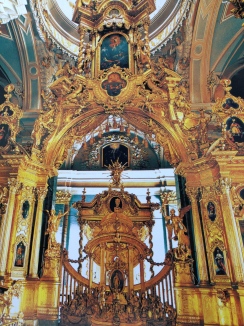 Our guide told us that Russian Orthodox cathedrals have no seats and that all worshipers are expected to stand throughout the entire service. In the 1830’s, to provide a more private area for the Tsar the “Imperial Place” was installed, made up of a small dais under a carved wooden canopy where the Emperor or Empress would stand during services, as shown below. The St. Catherine Chapel of the Sts. Peter and Paul Cathedral, also shown, contains the tomb of Emperor Nicholas II, Empress Alexandra Fiodorovna, their children and members of the household. 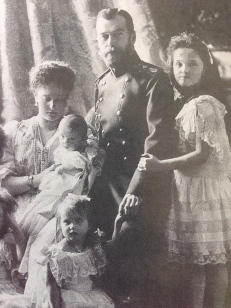