Old Town Estonia
After a tour of the outer city, we had a three-hour walking tour of old Estonia, a medieval walled city that had an upper and lower village. Dating back to the 13th century, this part of the city is a thriving district filled not only with great medieval architecture, churches, shops, restaurants, galleries, parks etc., but also about 3,500 full-time residents, making it a genuine central city experience, unlike the town of Colmar, France (reported in my post on the Viking River Boat trip), which came across as more of a Disney set than an actual working town.

The Alexander Nevsky Cathedral is an orthodox cathedral that crowns the hill of Toompea, thought to be the burial site of the father of Estonian folk hero Kalevipoeg.

Designed by Mikhail Preobrazhensky in a typical Russian Revival style, it was built in the late 19th century and is Tallinn’s largest and grandest orthodox cupola cathedral. The design was so disliked by many Estonians as a symbol of oppression that is was scheduled to be demolished in 1924. But due to lack of funds and the building’s massive construction it was never torn down. As the USSR was officially non-religious, many churches including this cathedral were left to decline. But the church has been meticulously restored since Estonia regained independence from the Soviet Union in 1991.

Below are just a few of the photos taken in order to give you a glimpse of this picturesque town. I prepared a more complete slideshow of our walking tour of the old town, which can be viewed at: Old Town Tallinn, Estonia. Next stop on the Baltic Sea cruise . . . Two Days in Saint Petersburg, Russia. 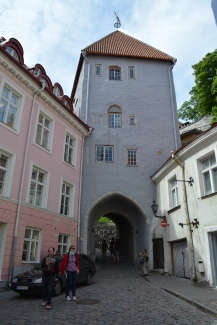 2 responses to “One Day in Tallinn, Estonia | Baltic Sea Cruise”