Saint Petersburg is the second largest city in Russia, politically incorporated as a federal subject; a large number of foreign consulates, international corporations, banks, and other businesses are located here. The city is located on the Neva River at the head of the Gulf of Finland on the Baltic Sea.

In 1914 its name was changed from Saint Petersburg to Petrograd, in 1924 to Leningrad, and in 1991, back to Saint Petersburg. Saint Petersburg, considered the country’s cultural capital, is often described as the most Western city of Russia. It is the northernmost city in the world to have a population of over five million. The Historic Centre of Saint Petersburg and Related Groups of Monuments constitute a UNESCO World Heritage Site. The city is also home to The Hermitage, one of the largest art museums in the world.

City Highlights and Observations
What started out to be a cold, gloomy and rainy first day in Saint Petersburg turned into a slightly warmer sunny day, at least for the most part. After going through Russian Customs (the only country on our cruise requiring us to do so), we continued our guided tours with the SPB Tours, where we joined 14 others in a minivan (with free wifi!!) to begin our tour of Russia’s cultural capital, Saint Petersburg. 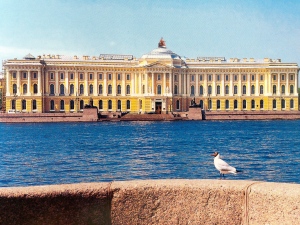 The city is the home of the Winter Palace and State Hermitage Museum, as well as many other world-renown cultural and architectural icons, including unbelievably ornate cathedrals and monuments. As we drive along the Neva River, golden spires mark the landscape and domed structures seem to be everywhere. It is a very grand city and the baroque architectural influence is obvious. 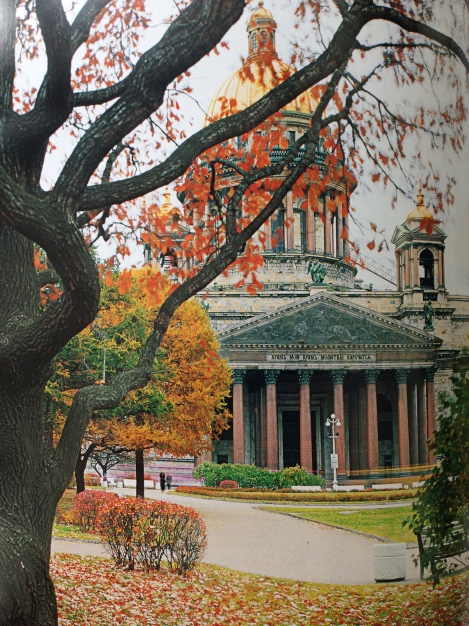 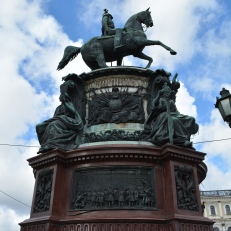 MONUMENT TO NICHOLAS I 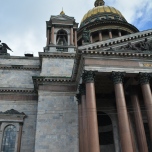 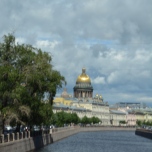 Before leaving the city for the day, we stopped by one of the local markets, where everything from fish to T-shirts was on sale.

Our second day in Saint Petersburg was very windy and cold again (and this is Summer!). After a short subway trip under the Neva River from what we were told was the deepest subway station in the world, our van took us to the Russian countryside.

Unlike the center city, where there is 100% high density multi-family living, the Russian countryside is dominated by single family homes and subdivisions, including President Putin’s official residence (used for ceremonial and official visits), set behind decorative iron fences that guard thousands of acres of land. 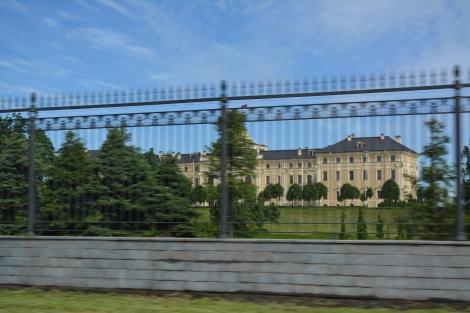 Saint Petersburg has an amazing collection of historic architectural masterpieces . . . unfortunately, however, we were able to see only a few. I think one would need to spend several weeks or more to get a complete understanding of the city’s historic architecture and rich cultural history. Even with the in-depth expertise of our local SPB Tour Guide, I will need to brush up on my Russian history if I am going to really appreciate the experience! The following posts have been prepared to give the reader a glimpse into the places visited over our two days in Saint Petersburg, published as noted below:

Note: Some information and a few photographs that further inform the subject matter were obtained from “SAINT PETERSBURG AND ITS ENVIRONS,” a Russian publication from 2007.