When the museum needed to expand, a separate building was commissioned that resulted in the development of the dramatic Frederic C. Hamilton Building, designed in 2006 by the international architectural firm of Studio Daniel Libeskind, partnered with the local architectural firm of the Davis Partnership. The building appears as a titanium-clad explosion of shards, with a massive prow that stretches across West 13th Avenue toward the Ponti “fortress.”  The metal panels and their coloration relate to the Ponti building’s rectangular glass tiles, and the scale is complementary. Laura Sydell, the Digital Culture Correspondent for NPR has written that “the new addition to the Denver Art Museum stands out from the more traditional boxy buildings around it. Its gray, titanium walls meet at odd angles and reflect back the light of the Colorado sky. It looks a bit like a piece of a distant mountain broke off and landed in downtown Denver.” 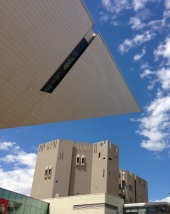 Libeskind says he conceived the museum as . . .

a dialogue between the 21st-century culture of downtown Denver and the surrounding Rocky Mountains. 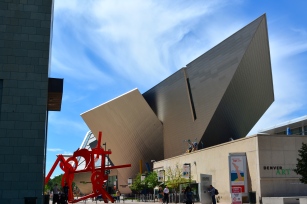 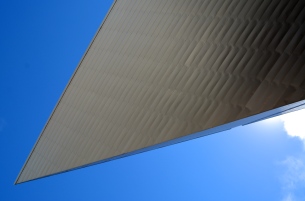