Although my friends from Boulder, Colorado had organized a full two weeks of hiking (one week in England and the other in the Canary Islands), I decided to limit my vacation this time to the first segment of the group’s itinerary  . . . a village to village walk in the English countryside northwest of London that will encompass over 48 miles over 4 days of hiking. In addition to the three of us from Colorado, our group also included two hikers from Palm Springs, one from eastern Washington, two from Los Angeles, California, and one from Australia for a total of nine, seven of whom are friends from other travel adventures, and two others soon to be friends. 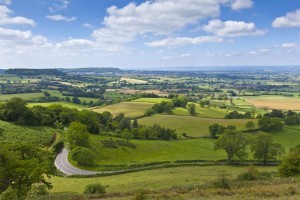 This English excursion took us to the Cotswolds, a rural area with outstanding natural beauty in south central England, about 88 miles from London. This sparsely populated farming region is characterized by gently rolling hills covered with a patchwork of green pastures, croplands, forests and quiet country lanes lined with honey-colored stone fences. There are gently flowing crystal clear rivers and streams, wildlife parks, and hundreds of miles of walking trails, some along old Roman roads, pilgrim trails and hilltops with stunning views of the landscape below. This pastoral region is also characterized by picturesque small villages, historic market towns with flower shrouded thatched-roofed cottages and stately manor houses, historic medieval churches, royal castles with magnificent gardens, and interesting historic places and buildings. The Cotswold area has been featured in the Harry Potter movies, and on numerous TV programs, including Downton Abbey.

Our trip begins on board the First Great Western train from London’s Paddington Station, traveling northwest from the city on the one-and-a half hour trip to Morton-in-Marsh.

From there we took taxis that travelled along Stone Road to Lower Slaughter, a village in the English county of Gloucestershire, 4 miles southwest of the town of Stow-on-the-Wold. Appropriately named, Stone Road passes by sandstone walls, fences, farms and houses as seen in most of the Cotswold landscape; historic structures as well as new residential and commercial structures are constructed with this stone, giving a unique warmth and richness to the natural and man-made environment. 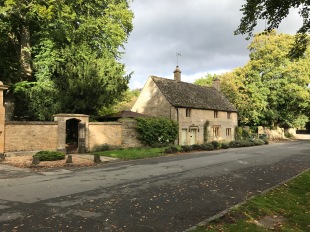 “Jurassic limestone gives the Cotswolds their distinctive character, and an underlying unity in its use as a building material throughout the area.”