Puerto Vallarta, Mexico, a resort town on Mexico’s Pacific coast and the Bay of Banderos is a very popular winter destination for many of my friends here in Denver, Colorado, where at times the temperatures can be somewhat colder! I first visited PV in the late 1970’s, when the town was a much smaller version of what it is today, with a much slower, laid-back atmosphere, and even less expensive then it is today. I remember staying in a beautiful hillside resort south of town, where each individual white-washed, red-tile roofed 1-bedroom apartment had its own small wall-enclosed swimming pool, and

flowering bougainvillea draped all over the  villa – all for a whopping $60 per night. My second and only other trip to the town was in the early 1980’s, when we sailed from San Diego, CA and anchored our 49′ Ed Horstman-designed Trimaran in the Bay of Banderos on the way to Acapulco, and eventually a month-long sail across the Pacific to the Hawaiian islands.

Compared with sailing from San Diego, getting to PV from Denver is very easy and relatively inexpensive! Southwest, United, and Frontier Airlines (among others) all have daily flights.  Once there, downtown PV is just 20 minutes away. After going through customs, just go outside to the Taxi Stand and take a cab to whatever Zone you will be staying in. If you want to ensure the least expensive fare, however, exit the airport property by going left as your exit the Terminal and walk over the pedestrian bridge across the highway and hail a cab from the nearby corner. It’s a short walk across, with steep ramps on both sides, going up and down. You will be met by a representative of the taxi union on descending the ramp. He will quote you a rate that will be approximately 2/3rds of the Federal Taxi rate, depending on where you are headed.

Puerto Vallarta is divided into four primary land use “Zones,” each with its own character and focus, as shown on the adjacent graphic. I spent my time in PV visiting the two southernmost zones . . . Downtown Vallarta, which is the “Old Town” of the city where the more typical city services, offices, retail and commercial, and business uses can be found, (along with residential, cultural and institutional facilities); and, the Romantic Zone, where many of the tourists stay to enjoy the day along the waterfront or at the one of the many resort hotels, sight-seeing and shopping, enjoying the many restaurants and bars, or just relaxing, taking advantage of the much improved beachfront facilities and amenities.

While most of my stay in Puerto Vallarta was spent exploring the Romantic Zone, I used one day to walk along the waterfront north of the Rio Cuale, the southern boundary of Downtown Vallarta. This older part of the city extends north, generally to the area around the Sheraton Buganvillias Hotel south of Lib. Luis Donaldo Colossi Highway shown on the map below. 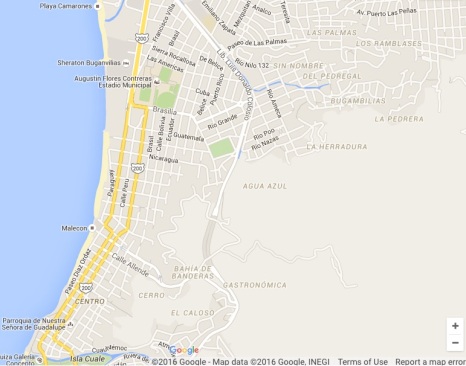 Church of Our Lady of Guadalupe

Historically, churches have always been located by the main square in Mexican villages or towns. Church of Our Lady of Guadalupe is known locally as La Iglesia de Nuestra Senora de Guadalupe. Often called “one of the most endearing” of the city’s landmarks, the church has a tower that is topped with a wrought-iron crown hoisted by angels designed to resemble one worn by Empress Carlota of Mexico.  This is an excellent example of how the church not only anchors the town’s central plaza, but also serves as a catalyst for other public buildings including City Hall, other government offices, and the public park in the middle of the square.

The church itself is not really a sophisticated architectural design . . . it is a mix of styles that is a result of different parish priests’ tastes and ideas that appeared along the way, with architectural elements that are neoclassic (as with the main building), the baroque-style wrought-iron crown, and the renaissance influence in the design of the side towers. 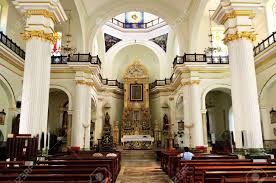 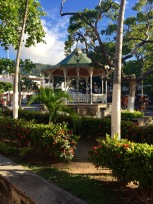 One response to “Four Days in Puerto Vallarta | Mexico”